For the centenary of America's entry into World War I, A. Scott Berg presents a landmark anthology of American writing from the cataclysmic conflict that set the course of the 20th century. 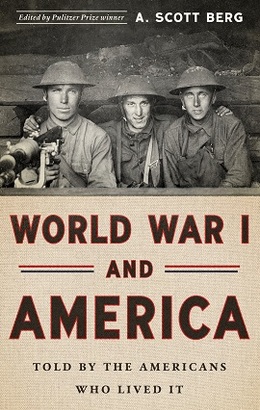 "Situated at or near the top of America's long list of 'forgotten wars' is the Great War of 1914-1918. The United States entered the conflict belatedly, and most Americans soon regretted having done so at all. Now, a century later, comes A. Scott Berg’s brilliant anthology to make remembering possible and even imperative. The result is gripping, simultaneously sobering and illuminating."
—Andrew J. Bacevich, author of America's War for the Greater Middle East: A Military History

"The world must be made safe for democracy," Woodrow Wilson declared a century ago, as he led the nation into war. World War I and America: Told by the Americans Who Lived It brings together 127 pieces that tell the vivid story of battlefront and homefront from Sarajevo and the invasion of Belgium through the sinking of the Lusitania, the Armenian genocide, the controversy over intervention, and the terrible ferocity of Belleau Wood and the Meuse-Argonne, to the League of Nations debate and the racial violence and political repression that divided postwar America. The writing gathered here illuminates, as no retrospective history can, how Americans perceived and felt about the war, why they supported or opposed intervention, how they endured the nightmarish reality of modern industrial warfare, and how they experienced the uncertainty and contingency of unfolding events. And it shows how World War I framed issues that still haunt us: what role should America play in the world? Are our claims to moral leadership abroad undercut by racial injustice at home? What does our nation owe those who fight on its behalf?

Among the writers: war correspondent Richard Harding Davis witnesses the burning of Louvain; Edith Wharton tours the war zones in the Argonne and Flanders; John Reed records the devastation in Serbia and Galicia; diplomats Henry Morgenthau and Leslie Davis report on the extermination of the Armenians; Jane Addams and Emma Goldman warn against militarism; pilots Victor Chapman and Edmond Genet describe flying with the Lafayette Escadrille; infantry officer Hervey Allen recalls the hellish fighting at Fismette; nurses Ellen N. La Motte and Mary Borden depict the "human wreckage" brought into military hospitals; suffragist Carrie Chapman Catt connects the war with the struggle for women's rights; and Justice Oliver Wendell Holmes considers the limits of free speech in wartime. W. E. B. Du Bois, James Weldon Johnson, and Jessie Redmon Fauset expose the contradiction between the nation's claim to be fighting for democracy abroad and its brutal treatment of African Americans at home. The international role of the United States is debated in strikingly contemporary terms by Wilson and his critics, as the nation grapples with its emergence as a leading world power.

A coda presents three iconic literary works by Ernest Hemingway, E. E. Cummings, and John Dos Passos that capture the postwar disillusionment felt by many Americans. Includes headnotes, a chronology of events, biographical and explanatory endnotes, and an index.

"As A. Scott Berg's riveting and timely new anthology shows, a century ago an extraordinary generation of Americans faced challenges that have unusual resonance now—our responsibility as the world's major power, the clash between democratic ideals and racial injustice, the brutality of modern war and how it changes those who serve. Their voices tell the stunning story of a crucial period in the history of our nation."
—Henry Louis Gates, Jr., director of the Hutchins Center at Harvard and Emmy Award–winning documentary filmmaker

"Would that the dead could speak! They do to tremendous effect in A. Scott Berg's finely judged collection. The unforgettable writing in this kaleidoscopic portrait of the war 'to make the world safe for democracy' reveals as never before the origins and course of the seminal catastrophe whose consequences we live with still. A treasure."
—Sir Harold Evans, author of The American Century